Saffron Walden Swimming Club (Saffron Seals) was formed in November 1911 as a Water Polo Club.  At that time the club’s base was the Town Baths in Hill Street, Saffron Walden, where they stayed until the Baths closed in 1982.  Below is a photo of the Water Polo Squad in 1911. 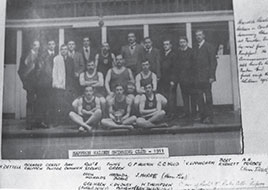 Over the years SWSC have produced some very good swimmers – not least one women’s backstroke swimmer who swam for GBR in the 1950s.  Also, many of townsfolk were Club members when younger, including some of those who have held positions of authority within the town.

Saffron Seals swimmers are once again achieving qualifying times for Essex and Regional championships and annually a large contingent travels to the Essex Age Group Championships, with a growing number qualifying to compete in East Region Championships.

Seals takes part in the Saffron Walden Carnival, organised every 3 years by the Round Table, and looks to stage or take part in various fundraising events throughout the year.